The Power of Astrology: Understanding Conjunctions, Trines, and Sextiles 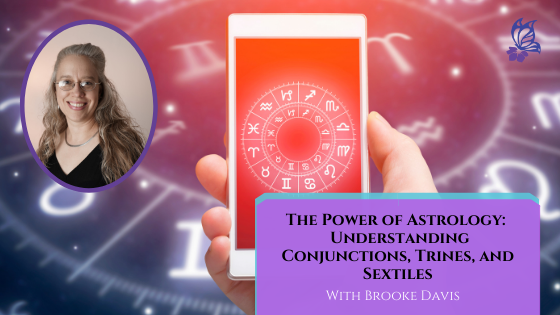 Aspects are part of every astrological chart and reveal how planets influence each other.  Three of the most important aspects are conjunctions, trines, and sextiles.

An easy way to understand aspects is to remember that an entire astrology wheel has 360 degrees.  Depending on the system you use to read the wheel (two popular methods are Placidus and Whole Sign), each of the 12 houses will have roughly 30 degrees.  Regardless of which house system you use, aspects are calculated the same way.

Conjunctions are major aspects that are neutral.  The symbol for a conjunction is a circle with a straight tail that angles upward and to the right.  The keyword for conjunctions is Prominence; the conjunction gives power to both planets.

The conjunct planets help you determine if the conjunction remains neutral or if having two planets near one another may be challenging.  Conjunctions are always planets within 8 degrees of each other, regardless of which sign and house they fall into.

An example of a positive conjunction would be Sun conjunct Moon.  This could indicate a person who is well-integrated in both personality and emotions.  An example of a more challenging conjunction might be Saturn conjunct Moon.  Saturn’s limiting effect (it’s the planet with rings that encircle it and act as boundaries) will “tamp down” or limit the moon’s emotional range.

Trines are major aspects that are positive.  The symbol for a trine is a triangle, and their keyword is Ease.  Trines are planets that are roughly 120 degrees apart, with an 8-degree orb on either side.

The trine is considered a positive aspect because the energy flows easily.  In the absence of other aspects, each planet in a trine can express itself easily because it has “plenty of room.”  While this may sound good, too many trines can be a substitute for hard work, which may be detrimental in the long run.

Because trines are roughly 120 degrees apart, they usually fall in the same element.  For example, you may have a trine of Pluto in Virgo, Sun in Capricorn, and Moon in Taurus.  These are all earth signs, so grounded, practical, and structured situations may feel comfortable to you.

Trine energy can be overpowering, like a siren song, which may not be healthy.  This is because the energy is constantly flowing, sometimes in subconscious ways.  Always consider the planets involved in the trine to determine how their energy may impact you; Sun trine Moon will be totally different than Saturn trine Uranus.

Sextile Energy – The Asterisk of Opportunity

Sextiles are minor aspects that are positive.  Their symbol looks like an asterisk, and their keyword is Opportunity.  Sextiles are planets that are roughly 60 degrees apart and have a 4-degree orb on either side.

Sextiles are sometimes thought of as lesser trines.  While trine energy naturally occurs without effort, sextile energy is opportunistic; you have to take action to seize the opportunity.

Another difference between a sextile and trine is that you can take or leave a sextile opportunity.  Trine energy is so strong it’s tough to walk away from.

Conjunct planets both have prominent energy.  Planets in trine allow energy to easily flow between those planets and elements.  Sextiles provide opportunities between similar elements, but you’ll need to take action to make the most of those opportunities.

Next month I’ll discuss how to interpret oppositions and squares.

Brooke Davis is a tarot teacher and wellness coach who enjoys helping the tarot-curious learn about the cards by using intuition and insight, not just definitions from a book.  Her four-course Tarot 101 series is offered online through Discover Your Spiritual Gifts. Register for the next session here.